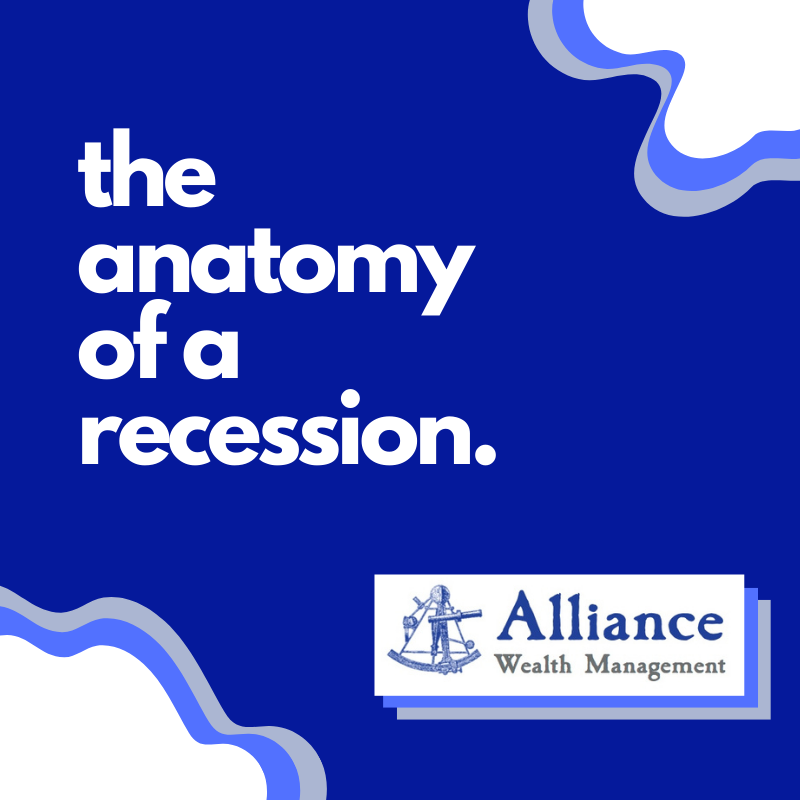 The Anatomy of a Recession

You may be hearing a lot of talk in the media about an impending recession.  The first thing I want to do is define what is a recession?  A recession is a term that refers to a significant decline in economic activity.  In the past, it has typically been recognized as two consecutive quarters of economic decline, as measured by Gross Domestic Product (GDP) in conjunction with monthly indicators such as a rise in unemployment.  The National Bureau of Economic Research (NBER), which officially declares recessions, now says the two consecutive quarters of decline in real GDP are not how it is defined any longer.  The NBER defines a recession as a significant decline in economic activity spread across the economy, lasting more than a few months, normally visible in real GDP, real income, employment, industrial production and wholesale/retail sales. (National Bureau of Economic Research)[1]

Since the Industrial Revolution, the long-term economic trend in most countries has been growth.  However, periodically there have been short-term fluctuations when major macroeconomic indicators have shown slowdowns or even outright declines in performance, over time frames of six months up to several years before returning to their long-term growth trend.  These short-term declines are known as recessions.

Recessions are a normal, albeit unpleasant part of the business cycle.  They are characterized by a plethora of business failures and often bank failures, slow or negative growth in production and rising unemployment numbers.  The pain caused by recessions, though short lived, can have major effects that alter a nation or even the global economy.  This can occur due to shifts in the economy as weak or vulnerable companies, industries, or technologies fail.  Recessions often cause dramatic policy responses from governments and Central Banks which can rewrite the rules for businesses; and/or cause social or political upheaval resulting from widespread unemployment and economic hardships.

There is no one way to predict how and when a recession will occur.  Aside from the old measurement of two consecutive quarters of GDP declines, economists assess several metrics to determine whether a recession is imminent or already taking place.  There are some generally accepted predictors that when they occur together have historically signaled a possible recession.

The first things we look at are leading indicators that historically show changes in their trends and growth rates before a corresponding shift in macroeconomic trends.  Some of these indicators include the ISM Purchasing Managers Index, the Conference Board Leading Economic Index, The OECD Composite Leading Indicator and the one most of you have probably heard of, the Treasury Yield Curve.  A flattening or inversion of the Treasury Yield Curve, typically the 2 year treasury bill as compared to the 10 year treasury note.  This signifies a tightening of the money supply and is a historically accurate predictor of a recession in the next 12-18 months.  These leading indicators are very important to investors and business decision makers because they can give advance warning of a recession.  There are also officially published data from various government agencies that represent key sectors of the economy, such as housing starts and capital goods new orders data published by the US Census Bureau.  Changes in these data points may slightly lead or move together with the onset of a recession, in part because they are used to calculate the components of GDP, which will ultimately be used to define when a recession begins.  There are lagging indicators that can be used to confirm an economy’s shift into a recession after it has begun, such as a rise in unemployment rates.

So what causes a recession?

Many economic theories attempt to explain why and how the economy might fall off of its long-term growth trend and into a period of temporary recession.  These economic theories can be broadly categorized as based on real economic factors, financial factors or psychological factors with some theories that bridge the gaps between these.  Some economists believe that real changes and structural shifts in industries best explain when and how economic recessions occur.  For example, a sudden, sustained spike in oil prices due to a geopolitical crisis might simultaneously raise costs across many industries; for example, a Russian invasion of Ukraine or a revolutionary new technology might rapidly make entire industries obsolete, in either case triggering a widespread recession.

The spread of the COVID-19 pandemic and the resulting public health lock-downs in the economy in 2020 are an example of the type of economic shock that can precipitate a recession.  It may also be the case that other underlying economic trends are at work leading toward a recession, and an economic shock just triggers the tipping point into a downturn.

Some theories explain recessions as dependent on financial factors. These usually focus on either the overexpansion of credit and financial risk during the good economic times preceding the recession, this theory is very eloquently explained in Dr. Robert Shiller’s book titled Irrational Exuberance ( Princeton University Press) or the contraction of money and credit at the onset of recessions, or both. Monetarism, which blames recessions on insufficient growth in money supply, is a good example of this type of theory. Austrian Business Cycle Theory bridges the gap between real and monetary factors by exploring the links between credit, interest rates, the time horizon of market participants’ production and consumption plans, and the structure of relationships between specific kinds of productive capital goods.

Psychology-based theories of recession tend to look at the excessive exuberance of the preceding boom time or the deep pessimism of the recessionary environment as explaining why recessions can occur and even persist. Keynesian economics falls squarely in this category, as it points out that once a recession begins, for whatever reason, the pessimism of investors can become a self-fulfilling prophecy of curtailed investment spending based on market pessimism, which then leads to decreased incomes that decrease consumption spending. Minskyite theories look for the cause of recessions in the speculative euphoria of financial markets and the formation of financial bubbles based on debt which inevitably burst, combining psychological and financial factors.

How to invest during recessionary periods?

During a recession, investors need to act cautiously but remain vigilant in monitoring the market landscape for opportunities to pick up high-quality assets at discounted prices. These are difficult environments, but they also coincide with the best opportunities.

In a recessionary environment, the worst-performing assets are highly leveraged, cyclical, and speculative. Companies that fall into any of these categories can be risky for investors because of the potential they could go bankrupt.

Conversely, investors who want to survive and thrive during a recession will invest in high-quality companies that have strong balance sheets, low debt, good cash flow, and are in industries that historically do well during tough economic times.

What does this mean for Alliance Wealth Management and our clients?

As we discussed in last month’s blog, we are not stock pickers; however, we employ best in class mutual fund companies, their countless analysts and professional portfolio managers to position their funds in just the right way to take advantage of opportunities that present themselves during economic downturns.  This does not mean that we abandon our long-term, diversified strategies but rather make incremental tactical tweaks to weather these storms.  Recessions are relatively short lived and are generally followed by a much longer period of economic expansion.  We, nor anyone else for that matter, have a crystal ball.  We cannot predict with any sort of certainty the top or bottom of market cycles.  Unfortunately, most investors are generally ruled by emotion that can lead to costly decisions.  What happens is that as the markets reach their peak and start their retreat, investors begin to get concerned until the markets have gone down so much that they want to get completely out of harm’s way.  Then, as the recovery begins and gets stronger and stronger, they finally feel comfortable enough to re-enter the markets.  What they have ostensibly done is sell at the lows, buy at the highs and realize all of their losses.  Our approach is to build a diversified model based on risk adjusted returns and an average over a longer time horizon to achieve our client’s individual goals.  We take this responsibility very seriously and are constantly working to make these economic downturns as painless as possible for our clients.

The National Bureau of Economic Research