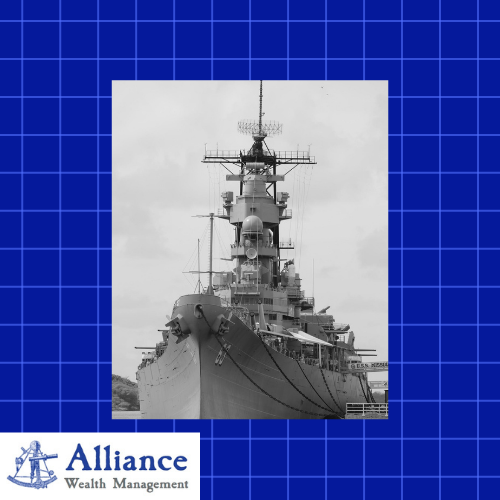 The USS Missouri (BB-63) is an Iowa class battleship and the last battleship commissioned by the United States, it is best remembered as the site of the surrender of the Empire of Japan, which ended World War II.  The Missouri was ordered in 1940 and commissioned in 1944.  In the Pacific Theater of World War II, she fought in the battles of Iwo Jima and Okinawa and shelled the Japanese home islands.  She later fought in the Korean War during two tours between 1950 and 1953 and served as the flagship to several admirals.  She was decommissioned in 1955, but reactivated and modernized in 1984 as part of the 600 ship Navy plan and provided fire support during Operation Desert Storm in 1991.  The USS Missouri was finally decommissioned in 1995 after serving 17 years of active service.  She earned a total of 11 battle stars for her service in WWII, Korea and the Persian Gulf earning her the nickname The Mighty Mo!

We felt this was a fitting ship for our Growth portfolio which is the battleship of our 5 models.  A traditional 80% equity – 20% fixed income, this model strives to achieve strong growth while providing some level of downside protection through diversification of varying asset classes.  Even though this is a model built for growth, it is still part of our overall strategy of returns on a risk adjusted basis with an emphasis on delivering Alpha to our clients.